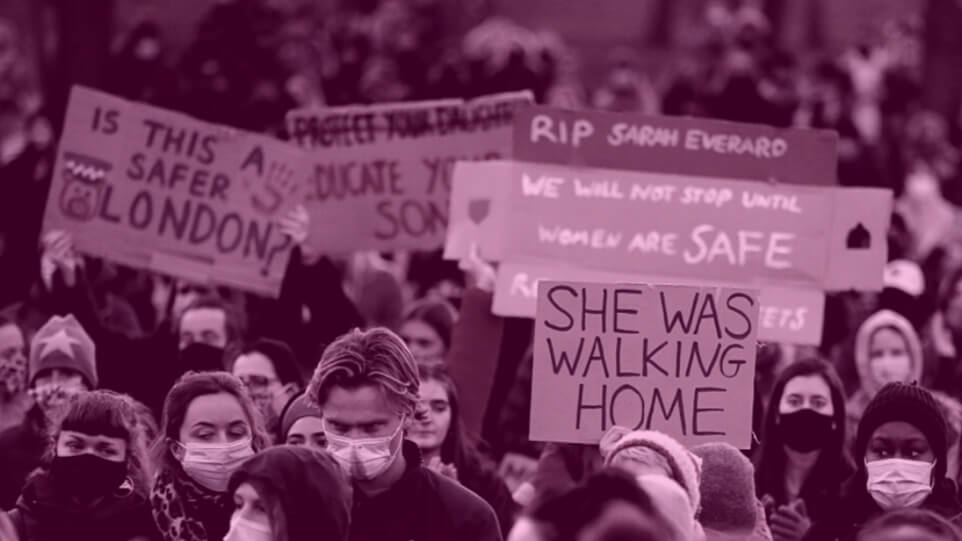 If you identify as a woman and you are concerned for your safety or wellbeing please consider reaching out for help from Women’s Aid. Their website has helpful information on how to disguise your browser history if you are worried someone may be monitoring your search history. Stay safe, you are not alone.

On the evening of the 3rd of March 2021, Sarah Everard disappeared from the streets of south London. Since then, women have been speaking out about their safety.

Sarah’s disappearance held special significance for me. My little sister lives in that area of Clapham and attended the vigil on the 13th of March. From afar, I sent her information on how to be safe, how to be protected from the police, and she and her flatmates armed themselves with torches and protection spray.

However, we were both filled with a pervasive sense of rage and exhaustion.

It only increased as she sent me footage of the piles of flowers at the bandstand on Clapham common, as we saw protesters pushed to the ground by police and we heard several accounts of men exposing themselves to attendees of the vigil. This exhaustion wasn’t just mine and my sisters’; almost every woman I spoke to in the last two weeks has expressed a similar sentiment:

Women are tired of feeling unsafe in the world and it is impacting our mental health.

Since Sarah’s murder and the public outcry about violence against women, many people have asked me how to support women and their mental health during this time and it is imperative that we do.

However, support can often feel disingenuous when it seems like those offering it are only responding to what’s trending. It can feel invasive or unhelpful when people start suddenly asking you how you feel unsafe in the world.

So it’s important to make sure the women in your life know that your check-ins are genuine.

Ask her how her mental health is in a kind, generous way. Make sure she knows that she is not obliged to talk to you, but that you are there to listen.

There has been an influx of women’s stories in the media at the moment — media outlets have been eager to share the gruesome stories of sexism and violence that many women experience on a daily basis. It is so important that women’s voices are heard in our society, but it is possible that for the women in your life this kind of conversation is overwhelming.

So don’t try to guide the conversation towards certain topics that might be stressful. For women, Sarah’s murder and the discourse around it is often immediately connected to their own stories of trauma, and every woman has a story of sexism which has been traumatic or uncomfortable.

Listening at this time doesn’t mean listening to stories of sexism and trauma. 97% of women have experienced sexual harassment and we should all be aware of the burden of that.

In the weekend after Sarah’s vigil, when it seemed like all of the social media discourse was dedicated to the conversation around violence against women, I had to disconnect from the internet. Being constantly part of the discussion was becoming too triggering, and I was falling into depression.

At the same time, I felt guilty about needing to pull away, worried that I would be considered as not being conscientious enough. Sometimes, in our need to prove that we are engaged and that we care about supporting women, we can rush past what is actually needed. Many of my friends haven’t wanted to talk about the sexism that they are burdened with on a daily basis; we’ve wanted distractions. Something fun to get us through the day.

Supporting someone goes beyond listening to their distress, it is also cheering them up and showing them love. Sometimes a well-timed delivery of flowers can say more than words.

Remember that actions speak louder than words, and social media is not action. It only takes a second to share a post online but it takes real care to change our patterns of behaviour to support the people around us.

At the moment, many women have been reminded of how unsafe we are in our usual routines. Going to the supermarket alone, catching public transport, taking Ubers or walking by ourselves feel dangerous. Offering to talk on the phone with friends as they walk or travel alone can relieve the burden of that fear.

Sending check-in texts when you know someone gets home can help them feel less alone. Donating to charities that support victims of violence or educating yourself, like taking the online Stand Up Against Street Harassment course can help the women around you know that not only are you with them, but you’re with all of us.

Lastly and perhaps most importantly, honour the women in your life with your belief in their stories, their experiences and their feelings.

If they say that they feel like someone was sexist towards them, don’t suggest that perhaps they misunderstood the situation. Don’t say that they should not make assumptions about all people based on this one situation. When we do that, we implicitly imply that the experience they have had is outside of the ordinary, making it odd or weird.

When we make an experience odd or weird for a woman, she immediately begins to wonder why this strange thing has happened to her. Was it something she did that made a man behave so strangely towards her?

It makes sense then why only 15% of sex crimes against women are reported. If, when a woman shares her story, she is told that she is given an implicit narrative that she is the problem, she is less likely to be able to feel safe enough to pursue avenues of justice. Avenues that often require a woman to have a core of steel in order to maintain their mental health in the face of heavy scrutiny.

So in a world where women’s words are rarely unscrutinised, be the place where she knows she will be trusted.

Trust the women around you. Demonstrate your trust in their intuition and their interpretation of their own experiences when they speak to you. Affirm their stories and their words and support their mental health as they navigate a world which often refuses to offer belief.

When we are trusted, when we are believed, when our words are taken seriously and honoured by those around us, then we move closer towards self-belief and improved mental health.

About the Author: Emma Hinds 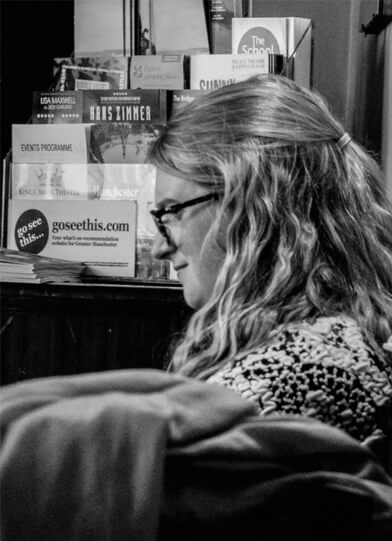 Emma is a writer living and working in Manchester. She is a mental health advocate and has been blogging about mental health for the last ten years. Emma has a history of eating disorders and is currently living with a diagnosis of OCD and chronic depression. She has been working specifically with young people struggling with their mental health for the last four years and is now supporting the Lily Jo Project’s On Track follow up schools programs. You can see Emma’s work and follow her mental health blog here. You can also follow her on socials here: twitter@EmmaLouisePH and instagram@elphreads.

This website uses cookies to improve your experience while you navigate through the website. Out of these, the cookies that are categorized as necessary are stored on your browser as they are essential for the working of basic functionalities of the website. We also use third-party cookies that help us analyze and understand how you use this website. These cookies will be stored in your browser only with your consent. You also have the option to opt-out of these cookies. But opting out of some of these cookies may affect your browsing experience.
Necessary Always Enabled
Necessary cookies are absolutely essential for the website to function properly. These cookies ensure basic functionalities and security features of the website, anonymously.
Functional
Functional cookies help to perform certain functionalities like sharing the content of the website on social media platforms, collect feedbacks, and other third-party features.
Performance
Performance cookies are used to understand and analyze the key performance indexes of the website which helps in delivering a better user experience for the visitors.
Analytics
Analytical cookies are used to understand how visitors interact with the website. These cookies help provide information on metrics the number of visitors, bounce rate, traffic source, etc.
Advertisement
Advertisement cookies are used to provide visitors with relevant ads and marketing campaigns. These cookies track visitors across websites and collect information to provide customized ads.
Others
Other uncategorized cookies are those that are being analyzed and have not been classified into a category as yet.
SAVE & ACCEPT
Book Lily Jo
Submit Superhero Photo
Book a Workshop
Book a Creative Workshop